One of the new cool features of the mongoDB Driver is that you can hook up to events on mongoDB and do monitoring/logging for your application. In this post I will show you a simple ASP.NET MVC project with logging.

First of all, you need to get the project up and running and get the MongoDB.Driver from NuGet. You can check out the sample project here. If you are new to mongoDB Driver you can read more here.

In short, what you do is create an instance of CarContext in your CarController. You will probably use an IOC container for this on a real project, but for this sample, I will just put this in the CarController. The important thing is that it is thread safe and only initiated once.

You do not need to set up or create the database before running the application. MongoDB Driver will do that for you.

If you do not want to work on mongoDB using the shell, I recommend you to install a tool like RoboMongo.

Now make sure you set your profiling level on you database so we can start diagnosing database interactions. If you want to know more about profiling you can read this post.

Connect to you database with Robomongo, right click your database to open shell and type: “db.setProfilingLevel(2)”

If you now run the application to get some queries executed and then in the shell in Robomongo type: “.system.profile.find()” you will get analytic data for the queries in mongoDB. 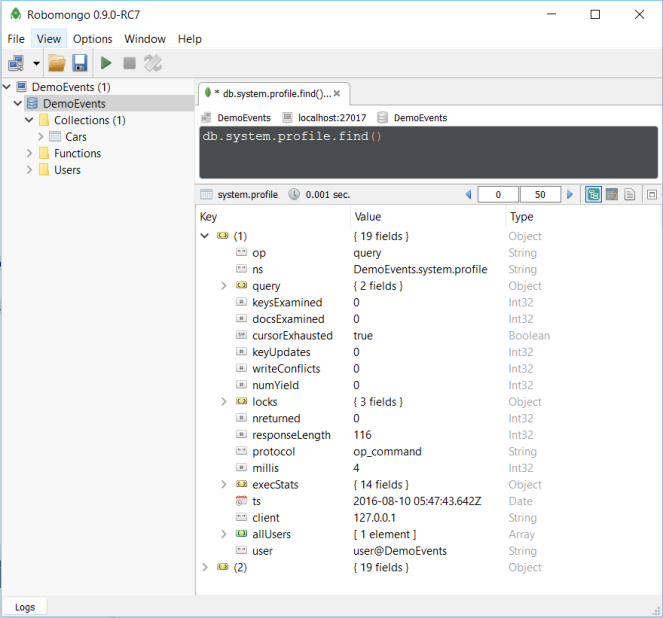 Now let us wire up the event subscription with mongoDB Driver. First, we need to change our overload on MongoClient in CarContext from just being a connection string to a MongoClientSettings object. Next, on our mongoSettings object we need to set up the CluserConfigurator, which is a delegate to set up the configuration. This gives us access to include the event subscription. 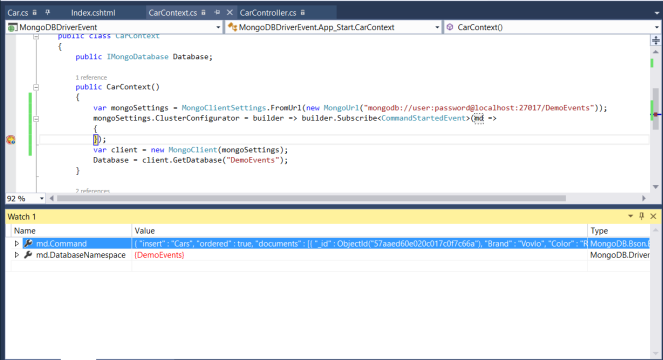 To start easy I will only specify the CommandStartedEvent that represents the start of any event that will be executed against the server.

If you go to “Post Car” page and add a car, and set a breakpoint on to event, you will catch the Insert Command from your application.

If you want to subscribe to multiple events, you can implement your own event subscriber like this:

Hi, I’m Ole Petter Dahlmann. I live in Oslo, Norway. I author this blog with 18 years’ experience in development. Opinions expressed here are my own. Thank you for reading.